How to Date a Mormon: 14 Steps (with Pictures) - wikiHow

Let her be focused on what she needs to do out in the mission field. Love her enough to let her go. I know rather cliche but it fits here. If when she comes back and you two reconnect, well there you have it. When talking to members who find themselves in this position I tend to give a certain set piece of advice. I see no reason why this advice should not also apply to non-members.

Dating a Mormon - For the person considering it

Let her go and don't wait. She is going to should have 18 months of in intense growth. She will be a different person hopefully better when she gets back. You need to need to spend that time living and growing as well. Go out and live your life while she is gone. If when she gets back the two of you want to try to reconnect that is fine, you can get to know the new her and she can get to know the new you.

Alex, I know this is difficult. I'm sorry about that. I do agree with the others that you need to support here in doing this, it will be a great experience for her. And you should date while she is gone, If you are still available when she gets back, you can see how things go from there. I also wanted to remind you she won't be "completely out of contact". She can write letters and emails weekly and receive them.

I know that doesn't seem like a lot, but as a missionary mom, I cam tell you it's better than nothing. So, do you think she'll grow out of this 'religion thing' she's got going on and hope she'll return to normal when she gets back? Or will you be her 'project'?


People go on missions to convert non-believers into believers. Do you expect that she will just give up on the values she will be espousing for the next 18 months when she gets back, just to be with you? Unfortunately, I've seen these kinds of situations where a missionary comes home and gets married to a person who is not a member of the church or is not as committed to living it as much as they are.

Quite frankly, in many instances the former missionary ends up a few years later regretting the decision to marry the non-believer, even though they may still love that person very much. There are ordinances and experiences that they wish they could share with their spouse that they will never experience in this life. If there are children, the non-believer spouse will not be able to fully engage in baptisms, confirmations, endowments, sealings, etc.

Is it fair to the believer to have a spouse who is never 'evenly-yoked' to them for the rest of their lives? I know this comes across as pretty harsh, but sometimes reality is not what we fantacized about before we enter into these kinds of things. Most non-believers don't realize the pain they put the believing spouse through when they think that their love is bigger than deeply-held spiritual beliefs, and that everything will end up rosy. A deeply religious person who ends up being married to a not-so-religious person or one whose beliefs differ from their own generally winds up being hurt by the failure of the spouse to choose to live the same life as they desire to have.

So I ask again: Or do you think that maybe you could put a little effort into seeing if her religion is something you might enjoy being a part of? For what it's worth, you are far from the first person to be worried about this. 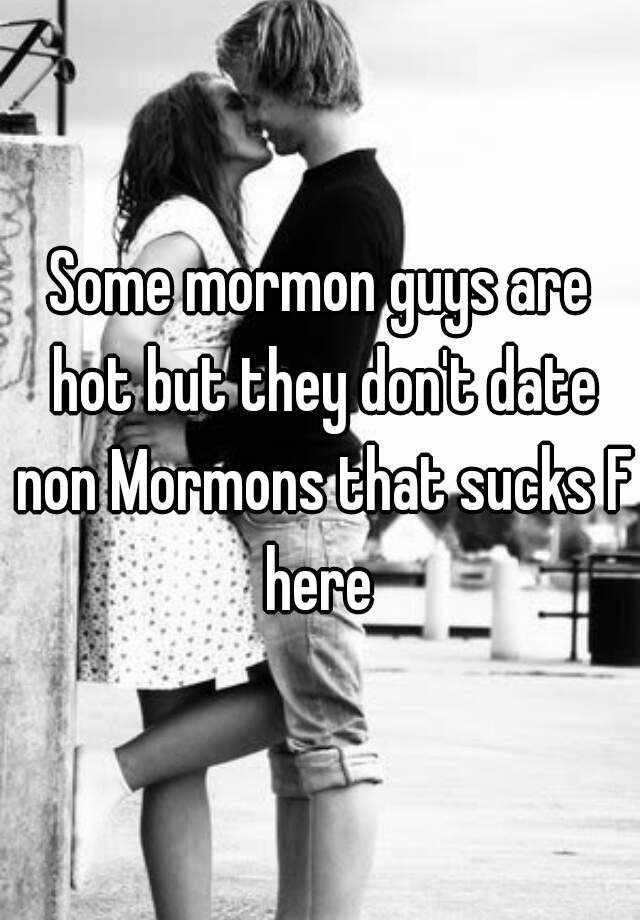 My own sister was up in arms about her boyfriend leaving on a mission and my sister is Mormon, so understands the culture. It's great that you're so supportive of your girl friend. A couple points of advice Especially if one is young early 20's and still have maturity growth to go through anyways a mission will help with that. Try to stifle that growth by living in a time-capsle. Ie, go live your life! Do things, learn new skills, meet new people, maybe even date. These are great things. That's hardly no contact and you'll see the growth the missionary has: A relationship with Jesus is not a hobby you do on the weekends, but rather it is something that incorporates your whole soul.

That is something you'll need to understand on a VERY deep level for the relationship to be long-term. I was devout Catholic when my Mormon husband asked me to marry him. He knew what he was getting in to, I knew what I was getting into, I said yes without hesitation and we got married one week later. That was 17 years ago. My husband and I are more in love today than we were then. And then there was this die-hard Mormon who married another die-hard Mormon So, if you want to marry her, you got 18 years to study and learn about everything you'd be getting into.

And yes, you can't put your life on pause waiting those 18 months.

There is much to do and learn and prepare and achieve in the next 2 years. That's like using the, "My Grandpa smoked 5 packs a day and lived 'til he was My neighbor didn't smoke, ate right and exercised and died of cancer at 40" reasoning to not bother taking care of oneself or refrain from smoking, etc There are same-faith marriages that fail.

Dating a Mormon: Tips for Non-Mormons

And this is all related to - I'm Asian, my husband is American and I make good money, my husband is a struggling student, I'm independent, my husband is die-hard Republican Is it better if I would have married an Asian, well-off, independent, Catholic? But I didn't because I would rather make this important covenant with an American, poor, Republican Mormon who I know for sure is an upstanding, respectful, righteous, God-loving guy who shares the exact same understanding as I do of what a Marriage means divorce is not an option for a Catholic and who chose to marry me.

Even after marriage, circumstances have led for my spouse and I to be separated for the benefit of the progression of our family. I in no way mean separated like a preamble for divorice. I mean we had to take jobs in different cities. We knew it was temporary and it was the best thing to do at the time. I think that deliberately eschewing other dating opportunities because you're waiting for a missionary is, in general, a bad idea. Two people who want each other when they're eighteen, may not find themselves on the same life path by the time they're twenty, even if they are followers of the same religion.

And, if I may be blunt: Those problems are exacerbated when the person doing the waiting is not a Mormon. As you've probably seen here, Mormonism does have a very strong not universal, but prevalent subcultural belief that it is generally preferable to date and marry other Mormons. Your girlfriend, as a missionary, is going to be immersed in that subculture for a year and a half. The dynamics of a dating relationship between a boy and a girl creates a very dangerous situation for a believer if he or she has chosen to date someone of another faith.

The end does not justify the means. Christians who emotionally manipulate Mormons for the purpose of conversion place their integrity in a precarious situation. Why should the Mormon seriously consider following the Bible when the Christian obviously is not heeding its admonition? You have the missionaries come over and try to convince you.

You ask me or someone like me to try to convince him. Here is what I hear you saying in your post: However, while I would never join, maybe I can help him become a Christian. However, I believe both you and your boyfriend each have selfish motivations, as you hope to convert the other for the sake of your relationship.

Remember, I warned you that you might not like this, but I am pretending you were my daughter, and I want only the best for you. Years of wisdom and experience gives me the ability to tell you this, with all gentleness and respect. Trust me, I have heard many, many stories like yours. How often does our advice get followed? Not all the time. Which faith is usually the winner? Honestly, it is Mormonism. One, please watch the three YouTube videos I list below. My daughter Carissa and I felt so strongly about this issue that we produced these for young people like you.

These videos will take less than half an hour to watch and I think can be helpful. Check them out at the bottom of this article.

In addition, if I were you, I would study up on the teachings of Mormonism, especially if you decide to continue in this relationship and receive a visit with the missionaries. For starters, go onto our website www. Go to the sections on God, Jesus, and Salvation and look through some of the articles. Our books can be helpful too. These are written from an Evangelical Christian point of view.

And there are lots of videos out there. Please notice the headline on my article: